Two In One Helsingborg & Helsingör 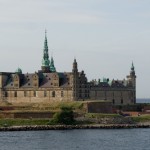 Seen from the quay in Helsingborg, Hamlet’s Castle shimmers like a mirage on the other side of the glittering sound, Öresund. If you long to be within the castle walls, that can be easily arranged, as the trip is part of the excursion to Kronborg.

The two countries of Sweden and Denmark are intertwined by trade, war, and love – something to ponder during the short ferry trip across the sound. The ferry departs from Helsingborg every 15 minutes and the crossing takes only 20 minutes. Arriving at Hamlet’s Castle by water is a journey through time, for this is how countless seafarers have seen the proud fortress over the centuries.

Shakespeare lovers everywhere are invited to attend the Shakespeare Jubilee in 2016!

Hamlet’s Castle in Elsinore (Helsingør) is one of the most important Renaissance castles in Europe and is on the UNESCO World Heritage List. The unique castle, with its thrilling cultural history, is strategically located at the narrowest point of the sound between Denmark and Sweden.  Kronborg was besieged by the Swedish Army during the war between Denmark and Sweden in 1658-1660. When the countries made peace, Elsinore and Kronborg remained Danish, but Skåne and Helsingborg were ceded to Sweden.

Culture Harbour Kronborg was opened in 2013 and is an entirely new and modern cultural hub created to revitalize and improve the area surrounding Kronborg, with the castle as the self-evident landmark. Visitors are offered a wide range of cultural experiences in an amazing location. This is your opportunity to visit a historic place with an ultramodern touch.