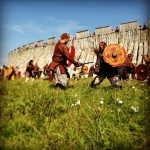 Markets, theater and the Vikingfeud – a thrilling competition between four Viking clans – this summer is the summer of the Vikings!

Visit the Viking town in Foteviken near Malmö, the Viking settlement in Frederikssund in Denmark and the two castles built by Harald Bluetooth when he strived to defend and unit his Viking Empire. This is a unique opportunity to see, feel, smell and taste how the Vikings lived!

Besides the annual markets and the traditional Viking Theater we introduce the Viking Feud 2013! Come and see the toughest, smartest and most cunning Vikings clash in a clan feud in which only the best can win. The Viking Feud 2013 will separate man from mouse!

The four Viking clans compete in eight old-Nordic disciplines to become the Viking clan of the year. The winning team will bring home the Trophy – a Viking sword. They will have their name engraved and they will keep the sword in their possession until next year when they once again will be challenged by the other clans.