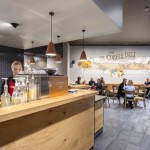 The first Starbucks in the city of Stockholm opened in December at the Stockholm Central Station.To celebrate the opening, Starbucks joined forces with local arts organisation Young Art and the photographer Johanna Åkerberg Kassel, to stage a special exhibition. Kassel’s work is a tribute to the city, highlighting its close relationship with the natural world and the sea, as well as its vibrant culture.
Ahead of the opening, Starbucks organized a treasure hunt, which took place across the city. Starbuck mugs were placed with statues of iconic figures across the city.