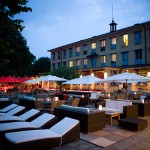 We have a few SPA hotels in southern Sweden with an international standard, one of them is Ystad Saltsjöbad with new owners since May 2007. The four young and ambitious entrepreneurs, are now transforming the hotel from a rather old fashion countryside hotel to a trendy SPA hotel in classic New Port style. Last week I went to experience the new hotel image. From Skane northwest, Helsingborg you will drive there in 90 minutes, via Malmö and then head east. It is a very beautiful route to drive too. 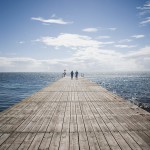 The hotel is located just a jump from the sandy beach of the Baltic sea and the view from the sauna is beautiful. From the hotel you could have a nice walk by the sea to Ystad town (following the foot prints of Wallander perhaps). Ystad nowadays hosts movie teams almost all year around for the Wallander films and other ongoing projects. Suddenly you could end up in a dramatic scenery while strolling along in this little relaxed resort.

The new owners of Ystad Saltsjöbad (Salt Creek Spa) that have their origins in the hotel and restaurant business in Göteborg, Stockholm and Åre.

From Ystad you will have a lot of options for exciting excursions. The area is scattered with castles, lakes and a breathtaking nature to dive in to. It was here I also stumbled upon the adventure camp.