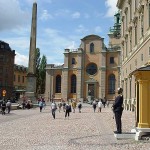 Exactly 200 years ago, Jean Baptiste Bernadotte ascended the Swedish throne. How was it possible that a Frenchman became the king of Sweden and which significance do royal weddings and their brides have on the survival of a royal dynasty? You will get both facts and the odd tale from a number of Bernadotte weddings – from Crown Prince Oskar’s and Josefina’s wedding, to Crown Princess Victoria’s weddings.

There is a daily military parade with a performance from the Music Corps in the Outer Courtyard.
Wander through the State Apartments, see the Royal Regalia at the Treasury, and find out about the palace’s mediaeval history at the Tre Kronor Museum. Gustav III’s Museum of Antiquities is included in the admission price during the summer season. Don’t miss the royal chapels, museums and exhibitions. Take a guided tour of the royal stables or stroll around the Djurgården hunting par