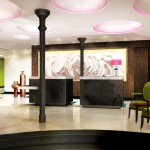 The Renaissance Malmo Hotel blends history with ultra-modern design in the hotel’s three preserved historical buildings.  The location of the hotel building named “the rose” dates back to the early 1800’s.  Located in the heart of Malmo, Sweden, the hotel is located at the vibrant Lilla torg and also just a five-minute walk to the Malmo Central Station which offers a short 30 minute train ride to Copenhagen International Airport, Denmark.

Courtyard by Marriott has opened its first hotel in Scandinavia, the Courtyard Stockholm Kungsholmen under a franchise agreement with Scandinavian Hospitality Group (SHG). With 278 guest rooms and more than 1,000 square meters of meeting space, the hotel is the largest Courtyard by Marriott hotel in Europe.
Located in Sweden’s stylish capital city, the hotel is located in the Kungsholmen neighborhood of Stockholm, within walking distance of the city centre and next door to one of the city’s main metro stations.
The 278 guest rooms of the Courtyard Stockholm Kungsholmen are some of the largest in the city with 26 square meters of space for guests to spread out.