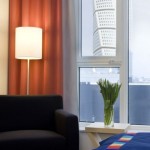 With views of famous landmarks such as the Oresund, the World Trade Center and the Turning Torso. Park Inn Malmo has officially  opened its doors.  The hotel has a location in the heart of Västra Hamnen which is the trendiest and fastest-growing part of Malmo. The area is known for its spectacular architecture, the good selection of nice restaurants, popular hiking trails and is situated on the waterfront. It takes only 10 minutes to walk to the center of Malmo.

Malmo Park Inn has 231 rooms, restaurant RBG Bar & Grill and a 40-square meter fitness center with a spectacular  ocean view over Øresund.  There are seven modern and flexible meeting rooms which are all very well equipped technically. The hotel is also very flexible in terms of smaller meetings and major corporate events. Soil, rock, textiles and metals

are the materials used to enhance the feeling of Scandinavian nature.