Oaxen Hotel Will Dock In Stockholm 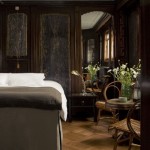 owned by Oaxen Restaurant will be docked  on the Quay No. 2 at Strandvägen in Stockholm. The prince will offer “Bed & Breakfast« to visitors  wishing to experience something different during their city break in Stockholm.

Oaxen is now on the 32nd place in ”The Worlds 50 Best Restaurants”, by rising 16 places from the last year and the 4th year on the list. You can se Oaxen on the Dutch Television program ”The taste of life” 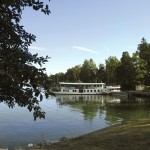 Prince Van Orangiën was initially the home and office of a ship-owner who cruised in Europe with his mud-fleet. The ship was built in 1935 in Vahali te Gendt, Holland and has served as a private home until 2007.

Prince Van Orangiën is a very prestigious ship, when constructed economizing was not the issue. The decoration is made with oak, ebony, Brazilian rosewood as well as Belgian slate and five different sorts of marble.The cabins “hotel rooms” a

re spacious and gently renovated.