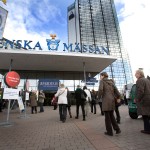 Right now there are over 20 major conferences scheduled 2010 in Gothenburg(Göteborg) on the Swedish west coast. The biggest of them all is Dermatology Congress EADV – The International Congress of the European Academy of Dermatology and Venereology –which is one of the largest ever in Gothenburg. The organisers expect to attract 9 000 delegates from across Europe between June 6 and 9 October.

The five largest congress in Gothenburg in 2010:

Stockholm, Malmö/Copenhagen(Denmark) and Oslo(Norway) are nearby destinations to be reached within 2-3 hours for pre/posttours and incentive programs in Scandinavia.