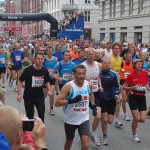 Copenhagen is hosting the IAAS/AL-Bank World Half Marathon Championships 2014 on 29th March. For the first time, this prestigious race is open to the public and you are invited to join 25,000 other recreational runners at the start line.

Copenhagen, the cosmopolitan hub of Scandinavia, is well known for its perfect mix of medieval charm and urban coolness. The race will start and end at the beautiful baroque Christiansborg palace which also houses the Danish parliament. The route will
take runners through the medieval city centre and past significant historical sites and along cobblestoned lanes. Five thousand entries have been earmarked for international runners and these can be purchased at the official homepage of the race: english.copenhagen2014.dk/