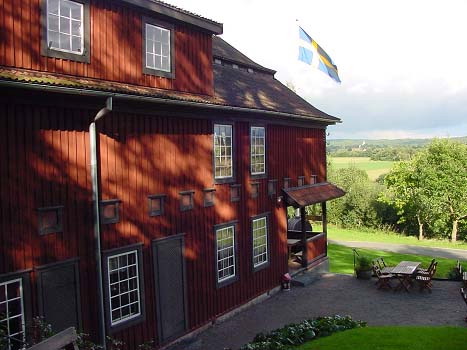 Explore the surroundings where the largest lake in Skåne, Ivö Lake is situated. The area around the lake in the North East of Skåne has an exciting geological history which stretches several hundred million years back in time.There are convenient picnic areas and breathtaking views along the winding roads which runs below the mountains and hills along Lake Ivö.And somewhere along the road you should find the Troll Stone.

The conditions that created the plains and the woodlands, the low-lying grass-covered shorelines and the high beech woods can be traced back to changes that transformed the landscape a long time ago. The lake was at one time a very important communication route. Old documents mention a number of wharfs along its shores. The remains of an old harbour can be found on the island of Ivö.

Minerals have had an important impact on the development of the region; from iron ore mining at Västanå to the quarrying of Vånga granite. China clay has also been enormously important for the Ifö Companies the largest industry in the district.

Hops cultivation was centred in the Vånga district and the only preserved oast house in Sweden was erected in 1926 and is located in Näsum. This area also became a centre for fruit growing early. Seeing the fruit trees blossom in May is quite an experience.

Estates and castles with names like Bäckaskog, Karsholm, Råbelöv, Odersberga and Trolle Ljungby are located in the southern corner of the region and the fact that the manors are all close to each other has also affected the landscape. The avenues leading to the manor houses can be seen from far away.

Bäckaskog Castle is beautifully situated on the isthmus between Lake Oppmanna and Lake Ivö. A group of monks moved here in the 12th century and built a new monastery which is now part of the castle. The castle had its golden age in the mid-19th century when king Charles XV had his out-of-town summer residence at the castle.

Trolle Ljungby is situated in the flat roaming countryside with cultivated fields, avenues and the buildings around the castle give this area its special character.

Trolle Ljungby Castle is surrounded by a moat and it is one of most magnificent renaissance buildings. Two remarkable items at the castle are the “Ljungby horn and pipe” which are on display on Wednesdays and Saturdays in the summertime in a window facing the castle courtyard . Legend tells how these remarkable items found their way to Trolle Ljungby Castle. There is also a medieval church worth visiting close to the castle.

The Troll Stone lies a couple of kilometres away from Trolle Ljungby along the highway. It is a large erratic block and is also known as Maglestenen. Legend has it that the stone, which lies right up next to a building, is connected with the “Ljungby horn and pipe”. It was here, at the site of the Troll Stone, that the horn and pipe were stolen from the troll.

Kiaby Church is one of the many medieval churches in the area. It looks rather small and plain from the outside, but the inside is filled with beautiful works of art that are a delight to behold. There is the crucifix with the silver shoes, a sculpture of the Madonna and the naïve painting depicting the ascension of Christ. The surroundings have attracted people through the ages. Stone Age settlements in the proximity of the church have been examined. Artefacts and human remains buried in log boats have been found in central Kiaby.

The Main Road Ferry Barum – Ivö Island is the only main road ferry in Skåne. It ferries people and vehicles between Barum and Ivö. The ferry is called Karna. There was a woman named Karna (1875-1935) who used to row people across the lake in the evenings and late at night. All one had to do was to tap on the window of her cottage by the ferry station in Barum.

On Ivö island there is an abandoned china clay and limestone quarry with shell gravel and shell limestone, rich in fossils. You might even come across your very own fossil to take home as a keepsake. China-clay quarrying ceased here in the 1950s. Ivö klack is a promontory that rises 133 metres above sea level. If you’re looking for a challenging hike this one’s for you.

Vånga Mountain is an area of magnificent hilly terrain and beech woods. Its altitude measures 161 metres at the highest point. At the foot of the mountain are orchards which provide a beautiful and richly coloured backdrop in the spring and autumn. There is a also quarry from which red granite is extracted for further processing. The quarry is not open to the public.

The Oast House in Näsum was built in 1926. Hops have been cultivated over large areas in Skåne but cultivation was later centred round Näsum and the surrounding area. There were 78 growers in and around Näsum in 1927, and in 1950 the number had fallen to 51. Hops regained importance during the Second World War but as imports increased after the war, the situation became ever more critical for Swedish cultivators. Operations ceased in 1959. The Oast House was run by the Association for Swedish Hops Cultivation. Coffee shop and Crafts.

The heart of the old village Västanå and the original village street have been preserved. The streets along stone walls in the old village correspond almost exactly with an official map from 1797. Most of the farms moved out to the new plots of land when the land was parcelled out in the 1830s but the structure of the medieval village still remains.

Västanå Mill dates back to 1380. The present millhouse, built in the 19th century, has been enlarged. The millwheel was replaced by a turbine in 1922 and the mill is still in operation. There is a magnificent vaulted stone bridge adjacent to the mill.

Västanå Iron Mine is the only one of its kind in Skåne and it is renowned for its rare minerals. No mining has been done here since the mid-1870s. The ore was presumably extracted by the use of opencast mining.

The Divine Pasture is a square area that once probably contained 250 raised stones and mounds. Its origin and purpose is unknown but graves have been discovered dating back to the Iron Age as well as Christian times. According to popular legend it was either a place of sacrifice or a pagan temple.

Travel Gate Sweden is a DMC Destination Management Company for the South of Sweden, Skåne including visits to Copenhagen and the east coast of Denmark. We provide tailor made travel and meeting services. Send us a mail with your request.
Links: Humleslingan Tourist Road

Kjuge kull The beautiful nature reserve called Kjugekull is one of the largest and best areas for bouldering in Sweden and includes right now 1050 different boulder problems and variations.