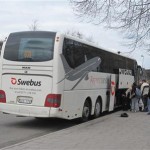 Swebus  bus company is running a total of 88 departures serving Sweden’s group matches in Gothenburg. What’s more, Swebus is also putting on extra buses for handball fans travelling from Oslo to Linköping and Norrköping where Norway will be playing its group matches.
Sweden will be playing in Gothenburg on 13, 17, 18 and 20 January. Extra buses have been added in Östergötland to provide better connections primarily from Oslo via Örebro to the group B matches in Norrköping and Linköping on 14, 15, 17, 18 and 20 January.
“As the men’s handball world championships is a major event, we’re anticipating that lots of people will be planning to travel between the towns where the matches are being held across Sweden,” says Swebus press officer Ingvar Ryggesjö. “We’ve added extra buses to make it easier for the  supporters to get to matches.”

The extra buses for matches in group B are as follows:   Örebro – Linköping 14.00 – 16.45 , return 22.15 – 0.55.  The bus will also stop in Norrköping.   The Handball World Championships start today and will run until 30 January. Swebus will be running 17 buses to the final in Malmö.

Swebus is the largest inter-regional bus operator in Sweden and runs express bus routes, airport bus services with Airport Transfer and private hire coaches. Swebus runs buses to about 150 destinations from Mora and Oslo in the north to Skåne and Copenhagen in the south.