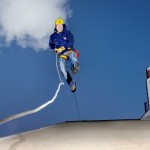 Have a secret dream to became Spiderman perhaps? By overcoming the (very natural) fear one feels when standing on the edge of a 6-storey building, negative stress is released and replaced with a truly amazing elated feeling of success and achievement! 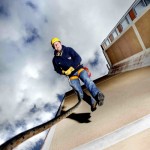 In May 2009 Tony opened up the Vertical Run site in Västerås  approx 100 km west from Stockholm. Operations are located on top of and around a hotel.  All you need is a pair of gym sneakers or similar low heeled shoes. After a short debrief, and a safety check, clients step off the roof and out on the wall. Well trained instructors have total control of the speed during the run. However, the name of the game is that the client is in charge! After two runs the event is rounded off with a diploma of courage and a t-shirt that you can’t buy, just earn! 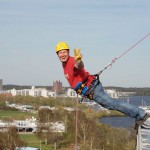 Vertical Run was developed from an old military technique called rappelling. In the late 1960s the rappelling technique transformed into Vertical Run in order to lower down troops from helicopters as safely as possible into hot drop zones under heavy fire. The technology is used by both the military and police. During the late 1980s a commercial operation was launched as a pure adventure experience in Australia.
Tony Berglund brought Vertical Run to Sweden. He has a background in the special forces were he underwent military training in Vertical Run in the late eighties. He has operated his own business as adventurer and photographer for eleven years and is active in a number of extreme sports such as skydiving, alpine climbing, rappelling, scuba diving and sea kayaking.

And I thought my Top Roof walk was the most thrilling, I am not sure anymore.