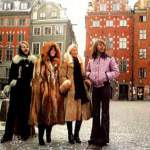 We can offer different themed city tours in Stockholm e.g ABBA Walk. With more than 400 million sold records worldwide ABBA belong to one of the biggest popbands of all time. The group was founded 1970, called Festfolket (Party People), but broke up 1983. By winning the Eurovision Song Contest in 1974, they celebrated their breakthrough with the mega hit Waterloo.
Even though only one ABBA member is born in Stockholm, the city can be considered their home town, as this is the place where they worked and lived for many years. Beside from the ABBA walk we can offer visit to the ABBA museum and a unique boat trip with ABBA music. Let’s create an ABBA inspired gala dinner!

ABBA The Walk / Stockholm Guided tour - 3 hrs
London has Beatles tours, New York has Sex and the City tours, and here in Stockholm we presents the city where Abba lived and worked! Join us on a walking tour of Abba land and 1970s Stockholm! Starting at the City Hall where Benny performed for the very first time, the tour continues via the Sheraton Hotel, one of many places Abba videos were recorded, and one of the city’s most distinctive 1970s landmarks. The Royal Opera was the scene of Abba’s legendary 1976 royal wedding gala performance, and Benny and Anni-Frid at one time lived in the Old Town. The tour revels in disco-glittery Abba history but it also includes the transformation of the Stockholm City district when the old Klara quarter was demolished; the Velour Man: a 1970s New Man; and the decade when the king married, and also formally handed over power to the nation. Duration approx 3 hours

Combine a classic city tour with a visit to the near archipelago island Fjäderöarna.